Pale owl; white below and orangey with gray spotting above. Heart-shaped white facial disc. Hunts primarily rodents in open areas by night. Roosts in old buildings and nest boxes by day. Widespread across every continent except Antarctica. Appears very white in headlights at night. Its call is a bone chilling, rising shriek.

(Otus asio)
Small, stocky owl with large head and no neck. Pointed ear tufts are often raised. Varies in color from gray to bright rufous (reddish-brown). Intricate pattern is perfect for camouflage against tree bark. Yellow eyes. Active at night when they prey on small birds and mammals. More often heard than seen; listen for its descending whinny and longer trill. Roosts and nests in cavities, including nest boxes. Found in a variety of habitats with trees, particularly near water. 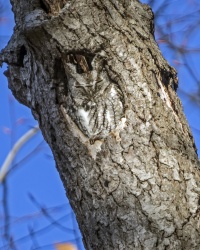 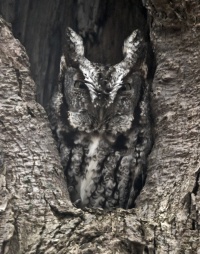 
Large and widespread owl with distinctive ear tufts. Found in a variety of habitats from dense woods to prairie and deserts with at least some trees. Also, found in wooded towns and suburbs. Typically well-camouflaged dark brown overall, but varies in color. Often engages in haunting duets, with males and females hooting back and forth. Preys upon a variety of animals, including mammals, birds and reptiles. 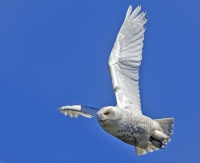 
Large owl, mottled brown and white. Rounded head lacks ear tufts. Black eyes. Listen for its instantly recognizable “Who cooks for you? Who cooks for you all” call. Favors large, mature forests with deciduous and coniferous trees, often near water. Hunts small animals at night; however, is more active during the day than other owls.

(Asio otus)
Medium-sized, rather slender owl with orange face patches and long "ear" tufts. Strictly nocturnal. Found in areas with a mix of dense cover for roosting, such as brushy thickets or conifer groves, and open spaces for hunting. Generally rare and seldom-seen, but can gather in communal winter roosts with dozens of individuals (if you're lucky enough to find a roost, do not disturb the birds). Size and shape similar to Short-eared Owl; but Long-eared is darker and more coarsely marked below with orange patch near the wingtips. Typical vocalization is a single low hoot repeated every few seconds; also gives a wide range of maniacal catlike screeches and doglike barks.


Medium-sized owl, more frequently seen in the daytime than other owls. Especially active around dawn and dusk, when it flies lazily over open fields or marshes in search of small mammals. Overall rather pale brown, palest on belly, with streaks and spots on wings and chest. Large buffy patch near the wingtips easily visible in flight. Females darker brown than males. Rarely heard vocalizing away from breeding grounds, where it makes a low series of hoots and a variety of harsh barking noises.

(Aegolius acadicus)
Pint-sized owl of the U.S., Canada, and Mexico; found in northern forests and western mountains. Prefers areas with conifers and thick understory. Fairly common, but shy and difficult to see. Patterned with brown and white overall, with streaked white forehead and blotchy rusty-brown streaks below. No ear tufts. Migratory, but numbers of migrants fluctuate greatly from year to year. Named for its loud, repetitive whistles that sound like a saw being whetted (sharpened). Also gives a harsher, rising screech. Most similar to less common Boreal Owl. Saw-whet is smaller with streaks (not spots) on forehead and richer orange-brown streaks on underparts. 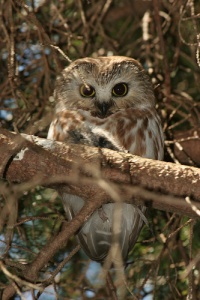